One of the real advantages of using multiphoton lithography is that it avoids the costly layer-to-layer alignment that is required to produce 3-D structures with the conventional 2-D lithography currently in use.  Perhaps more importantly, the multiphoton technique is generalizable to all sorts of novel "photoresists" that allow 3-D micropatterning of a wide variety of materials.  The 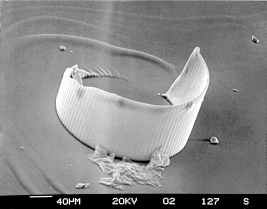 figure at left shows a 3-D object written into a commercial photoresist using 2-photon absorption.  The object was made by translating the substrate along the focus of the beam while simultaneously rotating it in the plane normal to the beam.  The "fluted" appearance results from columns of exposed resist, each created by the exposure of a single laser shot; the optical set-up used here produces roughly cylindrical columns with a ~4 µm diameter and a ~75 µm height.  The short columns at left are produced when most of the focal volume is in the substrate below the plane of the photoresist.  As the sample translates into the beam focus, the focal volume moves into the resist layer, creating a series of adjacent columns of progressively increasing height.  On the right side of the figure, the sample has translated so that the full column height is in the center of the resist layer and is not anchored to the substrate.  The region under these columns was undercut  when the resist was etched, resulting in a local collapse of the structure (this is why the structure is a partial ring instead of a spiral ribbon).  There are roughly 80 columns in the structure; since the laser has a 1 kHz repetition rate, the entire structure was written in 80 msec.   In addition to writing 3-D structures in conventional photoresist, we also have shown that multiphoton absorption can be used to expose commercial photographic film.  We also have developed the 3-D equivalent of photography by "writing" 3-D patterns of Ag nanocystals in the interior of a silica gel, a technique with the potential for the direct 3-D lithographic production of metal wires and circuits.  Finally, in collaboration with Xiang Zhang's group in the UCLA Dept. of Mechanical Engineering, we also have developed a new way to write sub-diffraction-limited size features in commercial photoresist by amplifying the intensity of the two-photon field in the presence of a small metallic AFM tip (apertureless near-field); by tracing the AFM tip over the sample, we have been able to write features as small as 70 nm.  We are also working to extend our 3-D lithography techniques to molecularly imprintable polymers that can be used as chemical sensors.  See, e.g.,